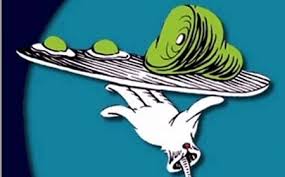 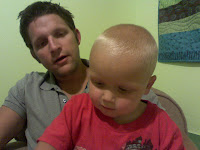 Good news: Eli likes "Green Eggs and Ham!" I have been patiently waiting for the day when he would sit with us and read the entire book. And he does! He wants to read it all the time. 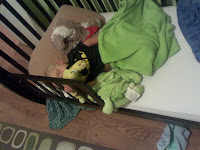 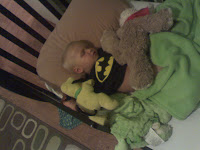 Also: I should really count my blessings that this didn't happen earlier, but Eli climbed out of his crib last week. It was actually really funny-since he didn't hurt himself. The house was silent; I had made sure of it to preserve the nap as long as possible. And then I heard, "Knock, knock! Knock, knock mom!" I opened the door and he was standing there with a triumphant smile on his face. I was strangely proud of him. So we took the front side of the crib off that night and he has done surprisingly well with the "big boy bed." Wouldn't you still want to take a nap and go to bed at night if you ran around an average of four hours a day?

Which reminds me: Eli is apparently overweight. At his last doctor's appointment, the doctor told me that he is in the 95th percentile for weight and that his BMI is a 19. Yikes. Does head size figure into total BMI? I told the doctor thank you,
that I am very health conscious, and that I am really not ultra concerned because he RUNS ALL DAY LONG. I actually really appreciated him bringing it up; he said that they are seeing kids having heart attacks at age 19, so there is a huge push to stem off childhood obesity. I think that is great and I appreciate him bringing up a sensitive subject.

PS Don't judge me for going into my kid's room while he was asleep and turning on the light to take a picture; it's a good thing I did. The diaper was off (again.)
Posted by Ashley at 8:59 PM

Oh my gosh I cant believe how big Eli is getting! It makes me sad to think that I hardly know that cute boy!
Thank goodness for blogs I guess :) When you guys come visit Utah again you have to call me!

He is so not old enough to have a big-boy bed, or worry about his weight, or mischievously climb out of bed. I'm so obsessed with that big boy! PS Adam looks very thin (in a good way).

For a second, I thought you put Eli in furry pajama bottoms...you know,trying to start early with the Burr boy aversion to pajama bottoms. But upon closer inspection, I discovered it was just his teddy bear.

Hahaha. Good times. Hey he can joing the big head club with Cade.

oops i mean join not joing.

That is so funny!!!!!!He is truly a big boy! Weird...it really seems like not too long ago you had him! He is cute!

Ashley! He is so cute! Also it sounds like he is ready to use the potty! :) We miss you guys! LOVE!!!

Big Boy Bed, Wow that is a big step. Honestly I would have thought he would have made it out of the crib earlier.

He is so cute. At this age, if they are fat they are cute. He is adorable Ash. When are you gonna be back!? He is so cute. My little guy just started doing the EXACT same thing your guy did. He is good with naps and bed time but one morning I had a little kid jumping on me and Yep, he climbed out. I spied on him and he does it oh so carefully. SO I am switching him soon too. HE also takes off his diaper but he is a little too lazy to figure out the onsie so if I put one of those on I am good.

Go read my sister in laws blog. Jayson and Brigitte. You will die what her little girl did and does. hahahahahahaha

Way to cover up his goods. I can't imagine why 2 year olds must rip their diapers off at every chance. Alisa has started sticking her fingers in her poop and then ripping off the poopy diaper and leaving it wherever she is. Gotta love it.

I hate the big kid bed! Well, not really, but we have to take some measures to keep Alisa in her room since she has so much more freedom and only wants to play. Good luck.

Miss you guys. Eli really is getting big!