My mom is a wizard 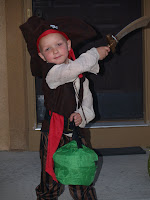 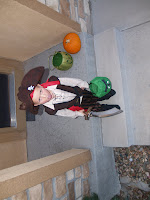 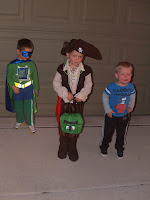 So everyone who knows my mom knows that she is a doer. She just goes and goes and gets things done. And she does them well...not like Ashley style, like improvise everything just to get it done asap so that nothing bad happens while I am "busy getting something done." She does things but she also does them impeccably, perfectly well. So she came for Halloween last week. And so that Adam and I could go to Taos, NM for the weekend. The whole thing was such a brilliant idea and even more brilliantly executed: Not only did she get to spend Halloween with the kids, not only did we design the baby's room and buy fabric WITH boys in tow, not only did we go away and find that she had made EVERYTHING while we were gone, not only did we have a fantastically wonderful and relaxing weekend away while someone who loves our children was in charge, but my kids were also alive when I got home!! Total win win win for everyone, but mostly me.

Oh, and after a monumental tantrum in which Tate threw up from freaking out so much over his costume at the ward trunk or treat, I had zero desire to press the issue on Halloween night. So he went trick or treating, sans costume, and marched right into each resident's house to find the toys in the basement. Yeah...he is a really delightful 2 year old at the moment. 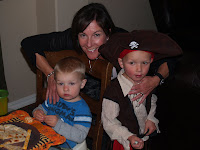 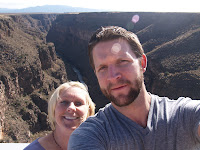 Also. This is Adam and me at the Rio Grande bridge in NM, which just so happens to be the original bridge to nowhere. Pretty sweet. I tried real hard to find a picture of my face that does not look so pregnant. Alas, this is what it has come to and one was not to be found. But how cute is Nora's room and how awesome is my mom?

Posted by Ashley at 4:15 PM 5 comments: Links to this post

So after a long fought battle to obtain a short sale for the home we bought when we moved to California, we finally closed and became proud non-homeowners on Halloween. Anyone who has not been through this miserable process can’t begin to fathom how much brain damage and emotional trauma is involved. So I will spare you. But I can’t express how happy I am to no longer be a homeowner, landlord, have no ties to CA, and mostly just be responsible for the house I live in!

So now begins the “Should we buy a house because it is the smart thing to do?” debate. A few weeks ago we went out to visit the home of one of Adam’s work associates. She lives about 30 minutes away from us on a decently sized piece of land…let’s be honest, anything more than the 1/10th of an acre plot that the mass produced homes in our neighborhood sit on is decently sized. But I mean like 15 acres. She has horses and goats and cats and dogs and all sorts of animals that I have no interest in. But I do have interest in the land and space and living a little removed and the ability to open my door and say “GO” to my children.

The boys had a blast, obviously. I mean literally, they were in heaven. It was sort of like being in Lake Powell where I just had this feeling of “ahh, we were meant to be here. This is what boys are supposed to do all day: run, run, run, jump, climb, run, get dirty, chase animals, throw rocks, sword fight with sticks, etc. “ They each got a turn to ride Starr, the nice old well broken in horse who wouldn’t kick even if a certain two year old refused to abide by rule number one of horse interaction: do NOT walk behind and ESPECIALLY underneath the horse. Apparently Tate missed (actually, rather ignored) that memo and spent most of the time running back and forth underneath the horse’s legs. Harmless, really.

So Adam and I go back and forth about what we really want when we have “our” house. The truth is, we may not really need to even discuss the pros and cons because by the time we are ready for “our” house, our kids will be parents themselves and looking for rest homes for us to die in. But nonetheless, we go back and forth about whether we want the land and the space and the freedom or the neighborhood and amenities and social activities for our kids. I really really like where we live. We are renting a home less than a mile away from Adam’s work, Target, Eli’s school, the bank, parks, community center complete with gym and childcare…literally, most days I don’t go anywhere more than a mile from my home and Adam comes home for lunch more days than not. Its awesome. I love the elementary school, and I love that Eli can go outside and find friends to play with. I love how well laid out and efficient the house is built; it makes practical sense on almost every level and isn’t too bad to look at. The yard is small and easy to care for.

But I hate that there is one or two or three of my same house on every carefully laid out street. I hate that my home is six inches away from either of my neighbors, which means they can probably hear me yelling at my kids. I don’t like that everything in the house is generic and practical, even though it makes perfect sense. I hate feeling like everything I do is on display and that I am “supposed” to be friends with everyone here…I know that sounds very cynical and antisocial, but I just don’t always want to be friendly ok????!!!!!! Sometimes ( a lot of times, actually) I just want to be left alone. And I will never buy another house in a homeowner’s association. Been there done that…unless it just makes too much sense not to, in which case….I don’t know. 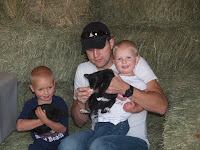 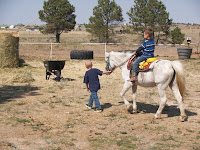 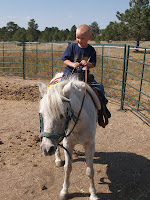 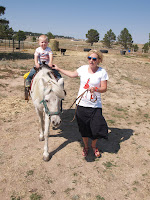 Posted by Ashley at 3:58 PM No comments: Links to this post