...mostly. Oh man, this job is far less fun than I thought it would be; and I didn't think it was going to be very fun. I will spare the internet the grosser details and pictures of Eli in "unders", as he so lovingly calls them. But suffice it to say, diapers are way underrated. And I say that even as I am forced to admit it is going surprisingly well.

We had a wonderful time in St. George last week. Adam saw the light of day, Eli got to see Adam, I got to be one of two equal parents, and we all got to see Bryan and Natalie, which was a lovely surprise. We went hiking in Zion's, ate at all of the good restaurants Utah has to offer-Pizza Factory and Bajio being my favorites-and generally mowged (a verb derived from Mowgli of the Jungle Book by one of my siblings...probably Chel?)around all weekend by the pool. Adam's parents did their best, as only they can do, to spoil Eli completely rotten which of course we appreciate tremendously. And now we are both back to working hard: Adam at creating teeth accessories and me potty training Eli. Be jealous; it's a wonderful life! 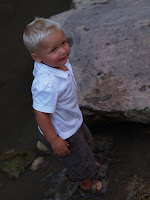 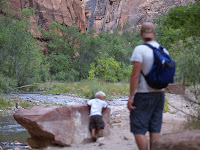 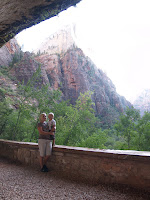 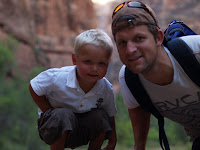 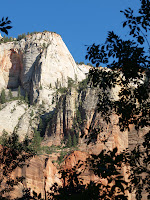 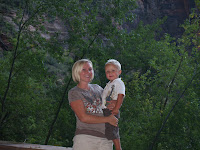 PS Not shockingly, Eli is an excellent rock climber and hiker.
Posted by Ashley at 2:38 PM 5 comments: Links to this post

Braggery and a VERY important question 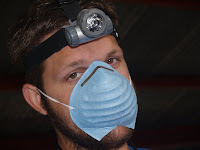 I don't gush about my husband very often. I try to avoid it where I can. However, I feel compelled to give him a shout out at the culmination of this hellish term. Adam has not really seen the light of day for about three months. The one advantage to that is that he has mostly avoided the 100 degree days-a small consolation for giving up so much vitamin D, I would say. He has been spending most of his days (and nights) locked in a dental lab dungeon, slaving away in the name of achieving a perfect denture, crown or whatever for his patients, often to have them slip out of his hands and irreparably crack in the final moments of the process. (I gave him what I thought was stellar advice: Never polish your projects. Doing so always leads to destruction. Eliminate that last step, settle for good rather than "THE BEST" and come home earlier....he chose not to accept, which is why, dear world, you should trust him with the care of your mouth someday: if he doesn't get it exactly perfect the first time, he will start over and make it perfect.)

So, aside from crashing at about 8:30 pm in the middle of all of the shows we have neglected three nights in a row, he still hasn't taken much of a break on his so called break: On Thursday he played with Eli most of the day in between searching for a cheap replacement (ie, bicycle) mode of transportation for his beloved motorcycle...oh, and trying to repair the lens on the camera that I broke; let's just not talk about that. Friday, he spent most of the day attempting to fix my dryer, WHILE letting Eli "help" him. The poor thirty year old warrior lost its ability to dry with heat last week. Adam, once again locked in a hot, dingy environment spent most of the day taking it apart, absolutely convinced that if he could channel enough time and brainpower into it that he could fix it. This attitude typically proves its usefulness. My dryer is not yet fixed, but a replacement part is on its way so we will see. Saturday, he spent most of the day at a dental conference and being disappointed by the devastating BYU/UTAH losses; let's not talk about that either. Sunday, was church-exhausting on any given Sunday. And today, he is spending on the phone trying to recruit vendors to come to the LLU vendor fair. And tomorrow-this might be the most taxing job of all for him-he has committed to go to Disneyland with us! Bless his heart.

We are going to go down to St. George on Wednesday for a few days. So that should be relaxing and fun. But I appreciate Adam so much. He is a tireless rock; or rather, he rocks.

PS Should Eli be Eli Manning or Billy Idol for Halloween?
Posted by Ashley at 2:07 PM 3 comments: Links to this post

I think being pregnant has really brought out the kid in me this time. Although almost everything about it has been more difficult, i.e. completely different, from last time, I have experienced the high that comes from emerging out of places very very low...much like a moody child who can one minute be found bawling and screaming because the world is ending, only to be immediately and completely consoled with a promise to "do the wash,"-or whatever really makes your kid happy. Ok, so I am being dramatic. But here are some of the things that have made me really really happy when I have felt really really bad the last few months:

-DISNEYLAND. I know, I know. Every one of you just decided you don't even know me anymore. But here is the thing: Eli is old enough now to get really excited, really appreciative and really opinionated about what he wants to do. We go and he tells me which rides he wants to go on and, not shockingly, he sprints from one venue to the next. I love watching that. I love spending so much time with him where he is so focused on something other than destroying my house! That is, as long as it is not hot and crowded, which it hasn't been recently.
-CRYSTAL LIGHT SLURPEES FROM 7-11!!! On my way to Disneyland on Friday, I saw a 7-11. And I had this flashback of Lisa Chuntz and I cruising the streets of Provo in search of an acceptable treat-either Crystal Light slurpees or Maverick frozen yogurt. And I had to have one. I thought about it the whole time we were at Disney. I had to stop, even just to check and see if they had one. Lo and behold! My child fell immediately asleep and I slurped on a wild strawberry slurpee while listening to the Red Hot Chili Peppers all the way home. Even though I wanted to puke when I got home, I was so very happy for that hour.
-MAC&CHEESE AND PB&J SANDWICHES. I don't know if it is just that I have grown ultra lazy and would rather partake of Eli's menu than make myself something off of my own for lunch, but have you tried either of these delights lately? Nothing wrong with them. Nothing wrong. Why did I ever think I was too good for these handy little kid foods?
-TV AND FOOTBALL, which are kind of the same thing now that football season has begun; our TV doesn't broadcast much else. I watched the Ohio v USC game by myself on Friday night while Adam went to his 49th Dave Matthews Band concert (not really, but you know what I mean.) I was so happy. Sick, but so happy to be sitting on the couch and watch so much peripheral excitement without actually having to move.
-NAPS. I need one like every other day. Mid afternoon naps cure everything... for a few hours anyway.

Oh bless my heart, those things are kind of sad. I kind of hope my enjoyment of such will wane with the progression of this pregnancy because I sound like kind of a loser.
Posted by Ashley at 2:59 PM 5 comments: Links to this post 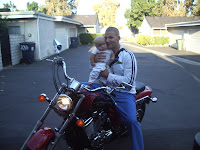 Oh my gosh, look at that fat baby...Anyway, today we said goodbye to Adam's beloved motorcycle. It was time. But it was sad. We always wanted to ride it together more than we really did, and we both worried about him getting into an accident-even just going to and from school. I think those fears were encouraged by several things: Massive amounts of debt that depend on Adam's functioning appendages to be paid back, a dental student who was critically injured a few weeks ago doing exactly what Adam does (riding home less than a mile during lunch,) and just the general sentiment that now is not the time to be taking any extra amount of risk. For three and a half years, Adam rode that bike to and from school and has loved having it. But it is time to move on. We sold it to a darling newlywed couple who was so excited to have it. But I think Adam felt like he was giving up one of his children...and it was sad. 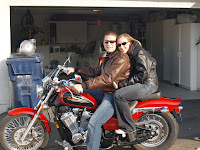