I did not intend to highlight magnificent dental products two posts in a row; I also didn't intend for this week of blog posts to be a study in Eli's misbehaviors. Fortunately for him, he is not old enough to be accountable to Santa yet. I was doing laundry and started hearing Eli saying "Mmmhh!" in his room. I walked in, and found him sitting on the floor along with all of the contents of my diaper bag, which I am still trying to figure out how he got down from a very tall bar stool in my kitchen. He had emptied the last four pieces of gum out of the box and bitten off the top half of all four pieces, wrapper and all. Good thing it was Trident Xtra Care: if he happened to chew it at all before he swallowed it, the stuff is excellent for your teeth; if not, they are relatively small pieces and I am sure the wrapper contains fiber.
Posted by Ashley at 1:21 PM 7 comments: Links to this post

Eli put my toothbrush in the fireplace tonight

Not just any toothbrush, my awesome Nimbus toothbrush. It has soot all over it but I don't want to throw it away because I love it. I might use it anyway guys.
Posted by Ashley at 9:04 PM 8 comments: Links to this post 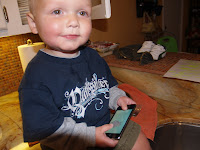 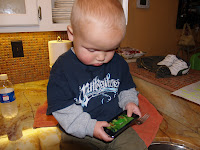 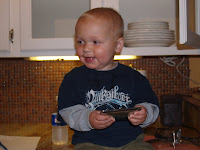 Santa brought Eli an Ipod touch. He doesn't know what it is, he doesn't know what it does, he just knows that it contains a wealth of amazing buttons which do really cool things when repeatedly touched. He looks at us, looks at the Ipod, grins, laughs, and goes "HA!" And we like it because it is not a phone which he can break or a device from which to accidentally call 911 or obscure acquaintances. I have never seen a child so thrilled as when we showed it to him...we didn't realize it was going to be his, but he quickly commandeered it just as he has done to all of the phones, remotes and everything we own with buttons. I suppose we should have known.

Adam had an extra X-box that he listed on Craigslist, which by the way is my favorite hobby right now...maybe it is just that we need extra Christmas money, but I also love walking around my house and finding things that I don't need or use and getting rid of them. So we had a lot of people interested but one kid wanted to trade his Ipod touch for the Xbox. While doing so involved a few sketchy details, such as meeting a high school teenager at a Riverside Walmart at 10:30 on a Friday night...what?? Yeah, I thought my husband might get shot. Nevertheless, he is alive and now Eli is the happiest child. And so are we, because it is going to mean a much smoother, pleasant and less complicated drive to Utah.

Also, it has finally cooled off and is now raining here, which means I can finally turn on my fireplace and enjoy it, which means Duane sits in front of it all day long, which means Eli has to lay down with him if we wants to hang out with him, which he does because they love each other, which makes me love both of them. 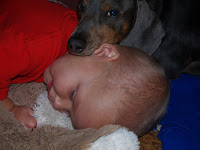 Someone tried to steal my George Foreman grill 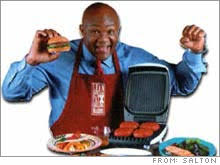 which subsequently resulted in my husband triumphantly brandishing his machete. Oh, we thought, and hoped, the day would never come. Nevertheless, at approximately 2400 hours, we were abruptly awakened by a loud crash in our kitchen. We both sat straight up in bed, looked at each other with a frightened "What the hell was that?" face and contemplated the scary thought of someone, again, stealing (or worse) our possessions. I proceeded to pull the covers over my face while Adam snuck quietly out of bed and reached up inside the closet for his cherished weapon. Amazingly enough, through my terror, I was able to conceive the thought that Adam must be thinking that this was at least a little bit cool...which, he later confirmed, was true; I also remember thinking, "holy crap, this is taking entirely too long for him to get his sword and confront the intruder," which he also later confirmed was true. So Adam in his g's and I in my robe crept slowly and quietly through our long hallway expecting to meet we knew not whom in our violated kitchen. When we arrived, we found not a robber but a cracked George Foreman grill resting helplessly on the edge of our counter top. Don't worry, it still works, despite the random five foot fall from the top shelf. All is well. I love my lean mean fat reducing grilling machine so don't anyone else think of messing with it.

Oh, and Duane and Eli slept through the whole thing. I hope that Duane is a somewhat more useful guard dog in case of a real break in.
Posted by Ashley at 3:06 PM 10 comments: Links to this post