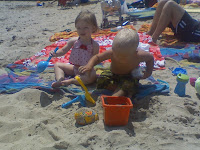 So, on Saturday, Eli and I went down to the beach to see my very oldest, dearest friend Brittanie. Brittanie was my very first friend and I sort of adopted myself into her family because they went out to eat at cool places a lot and were kind enough to take me with them. Eli got to play with Indie in between trying to drown himself in the ocean; she was rather disgusted-as most girls are- by his eagerness to immerse himself, first in nasty water and then in dirty sand. But then they watched Jungle Book together while we enjoyed a hamburger with the whole Wilson family and that was good. I love these people and it was so fun to pretend like I was a kid again with them.

Also, Eli thinks that he is Michael Phelps. 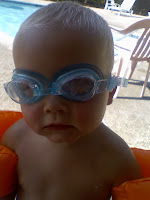 We were at the pool the other day and I asked him if he wanted to jump in all by himself, as I was not planning on getting wet. He looked at me all nervous like, and said in a shaky voice, "Yeah..." I laughed and told him that he didn't have to if he didn't want to. Then, he started to count to three and he just jumped. What a champ. My kid rocks. 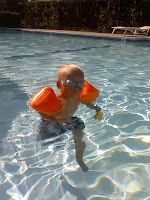 Sometimes, it is really hard to keep up with a kid who thinks he is so invincible. But I am pretty sure it will pay off in the long run. And let's be honest- I want tough kids; I am tough, so they have to be tough. We are going to go cliff jumping and snowboarding and motorcycling together and there is no whining about being scared allowed.
Posted by Ashley at 2:18 PM

I'm still a lot-bit jealous over your activities with the Wilson Clan...totally the good old days. E is going to be such a fun yet dangerous older brother some day!

Adam and fam!! Looks like you guys have been having too much fun. Jealous...only word that comes to mind. I hope everything is well with you guys. Take care
-K.C. Oliver

Oh how fun, that you and Brit were able to get together! Eli looks so awesome in his swim gitup! I love it!

Eli is so dang cute. I miss you guys!

Ashley it was to fun to see you and adorable Eli. It was just like old times. I can't even think about Britt's childhood without thinking about you and Chelsea. Good times, thanks for coming down to CDM to see us.

Cute. I am glad to see those arm rings work. I considered buying some for Cade but the package said for 3 and older. Screw the rules I'm going for it!

That picture is too cute! We had so much fun with you guys at the beach, and at Ruby's. It was so fun to see you guys!