I realized, based on several different factors, that the jokes I made in my last post were not necessarily funny to everyone. I would like to devote this post to explain the basis for joking about a terrible disease, which, to set the record narrowly straight, my son DOES NOT have...anytime you have to discuss the reasons for your jokes, you know they are bad. Like Mike Huckabee joking about pointing a gun at Barack Obama. Ha Ha-not. Fortunately, actually unfortunately for me, I don't have to go on Meet the Press with Tim Russert to explain myself. Actually, I would love that. But I will just do it here.

SO just in case you have been living in a hole for the last six months, there are no small number of people in this and other countries absolutely convinced that vaccines have caused autism within their small children. Given the astronomically soaring rates of autism in the last couple of decades, the theory is not completely crazy...except that there is no scientific evidence for it. Yeah, except for that.

Still, Adam and I reviewed all of the studies before ultimately deciding to give Eli all of his shots. I talked about it with his doctor and countless other friends. While I know that there is no credible study that makes the link between vaccines and such a terrible onset of circumstances, it still makes me nervous giving my child multiple shots at once. I told my doctor as much and she said she was perfectly willing to work with me on splitting them up- especially once she realized that I was not one who saw Jenny McCarthy say her son has autism, and it's all the vaccines fault so now I hate vaccines without doing any further research. We ultimately decided that the more important factor was that we (Adam and I) are both traveling to a third world country in a few weeks and the risk that we might bring back a disease which Eli could catch, were he not inoculated, far outweighed the risk that he might contract vaccine onset autism. So he got everything except for chickenpox. We'll do that in a few months.

So that was why I was joking about it. The doctor mentioned that his head was a little large and that we should have him tested for lead poisoning just because our house was built in the 70's. I impulsively thought it was funny to combine all of those together for a quick quip; but on further reflection, realize that people not steeped in the vaccine controversy, and even those who are and aren't so cold hearted and insensitive as I, might think that a ridiculous and very unfunny thing to kid around about. So nor more kidding about my kid and devastating diseases.

In any event, despite all of the scientific evidence to the contrary, I am still the littlest bit nervous about all of the shots that a child gets in one sitting. I think it is worthy to consider spreading them out. I read in a Baby magazine just last night that the CDC has retracted its initial endorsement of combining the MMR with the chicken pox shot because a higher incidence of fever induced seizures was occurring with the 4 in 1 shot. I don't know, I am about the farthest thing from a scientific authority, but that just doesn't make sense to keep upping the number of shots combined to avoid a few extra pokes. My kid can handle the pokes a lot better than he can a seizure, or something worse. So, in the future, I will probably spread out my kid's shots. He will get ALL of his vaccines. I think it is far more dangerous, and frankly very irresponsible and stupid, not to get them. But I also think it would be wise for doctors to consider accommodating parents' fears about this issue rather than dismissing them; when there are courts that are granting millions of dollars worth of settlements to parents claiming their child has autism resulting from a shot, this is not just going to go away.
Posted by Ashley at 9:18 AM 17 comments: Links to this post

The boy walking for realsies

Sorry, don't know how to turn it. Deal with it.


Went to the doctor today. E has a big head, has to get tested for lead poisoning and doesn't say three words well...so I think he might have autism; good thing he only got three shots today. Just kidding Michelle.
Posted by Ashley at 1:28 PM 11 comments: Links to this post

OMG Blogdor, you so totally like rock my world 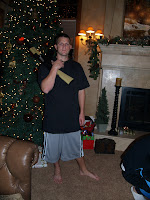 Happy Birthday Blogdor. I have been lurking around your blog and think that you and I might hit it off for several reasons:

-You are hot, hotter than I am or ever will be. So that works well for me.
-You are freakishly intelligent, more intelligent than I am or ever will be, so that also works well for me.
-You are the conservative that I want to be. I am still in my political infancy, if I am honest, wandering hopelessly with my maternal instincts from liberal let's take care of everyone here and in the world, if not inefficiently Democrat, to this is ridiculous, let's get smart and practical and do what works Republican. I know at my core that I am a little more liberal (wrong) than you are, and you set me on the straight and narrow once again...does anyone else want to throw up that I am equating Republicanism with the Gospel? I am just doing it for you, Blogdor. It's your birthday babe. So that ALSO works for me; you help me be the true conservative that I want to be even though my instincts sometimes tell me otherwise.
-You are hilariously clever and by far my sarcastic superior, which also works for me because you help me hone my skills as a level five, black belt smart ass. Babe! Don't say ass on the internet!
-You never swear.
-And the biggest, and probably most compelling reason we should be BFFs foreva is because we have an adorable little son together. And you are a better parent than I am. Oh, and a better blogger too. 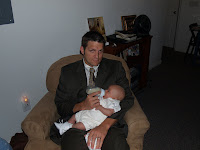 So, in summary, I love you dear Blogdor because you keep me on my toes. You do everything freakishly amazingly well and serve as my exemplary example in just about every arena of life. And I am a selfish leach who wants to draft her way through life and eternity off of all of your noteworthy qualities. You interested? Happy happy birthday. You rock. So, wanna hook up or what? I'll tell you the rest later...wouldn't want to be inappropriate or anything on the blog.
Posted by Ashley at 9:40 AM 9 comments: Links to this post

Eli can walk! Well, sort of.

And please never mind my man sweats...or Adam's baby talk...or the fact that we bribe our child to do everything we want by giving him the dog leash. It's the only way he is interested in the pastime of walking. PS If you are a Hillary supporter, don't read Adam's new post. Or, actually do, and explain to him why he's wrong. Yes, that's right, after a two month hiatus, Blogdor is back.

So it has been three whole days since Eli has woken up without pooping and/or throwing up all over his freshly replaced sheets and bumper pads. Is it safe to spend 45 minutes putting the whole bed ensemble back together? It took me a good week of washing it all every single day and putting it all back together before I wised up and just put a blanket over the mattress. So now the bedding is all sitting in a corner just waiting to be put to use...I swear though, there will definitely be an inevitable amount of resentment toward my child if I put it all back together and he sullies it with diarrhea or throw up tomorrow morning...I know, I know. Poor Eli, so sick. I'm the mean, cruel mother who thinks about what a pain it is to wash sheets everyday when her child is sick. Yucky virus, blah blah blah. Yeah, he's been sick. But come on people, focus on me. Put the bed back together or no? Is this nasty thing over yet? See, these are the complex problem solving requirements of motherhood that few people consider when embarking (whether deliberately or inadvertently) on the whole parent journey. So what do I do? I'm going to do laundry and I expect some advice by this evening before he has to go to sleep.
Posted by Ashley at 2:55 PM 12 comments: Links to this post 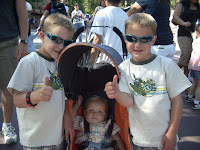 Most of you know that I am no fan of Disneyland. A Friday afternoon didn't do much to change my stereotypes of the place, HOWEVER, we had fun in spite of the long lines, way too many people, high temperature, and squirming child trying to constantly evade my grasp. It was fun to see Adam's sister and her family too. They very kindly treated us to dinner and let us invade their hotel room all in an effort to convince us that Disneyland really does rock...I'm sure it does on any other day except for Friday. Favorite quote of the day: "Ashley, just enjoy the ride," from my very philosophical nephew Cooper on Pirates of the Caribbean. 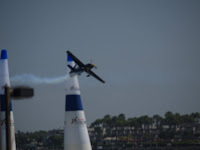 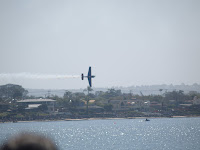 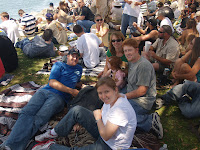 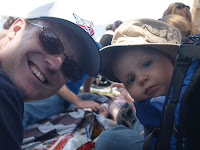 Then we went down to San Diego for the sick nasty Red Bull air race show on Saturday. Man, those people know how to put on a party. It was a blast. We sat on blankets under the shade right next to the water and watched these planes fly top speed in and out of the pylons. So cool. We invaded the hotel room (again) of our dental school friends on Friday night and then met other friends at the show. After, we went to Old Town San Diego for some delicious Mexican food...It was almost worth waiting for an hour and dealing with four tired, sunburned, screaming kids. Favorite quote of the night, "Wow, by the time we get in there, even Adam will be drinking!" from my friend Lisa when it became clear that dinner might become a disaster...actually, that wasn't my favorite quote, but I don't know if she wants me repeating the other one...it was a good night. We'll leave it at that. 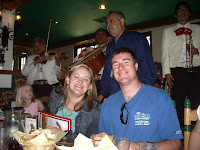 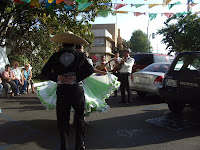