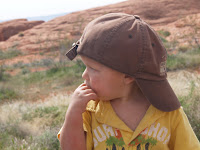 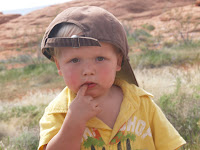 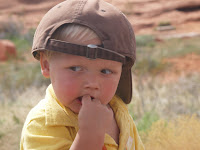 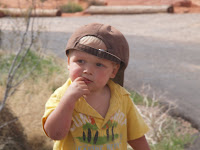 These are an old series of pictures that Adam took which I thought most clearly captured Eli's attitude toward...well, mostly just his attitude. I love them because you can just tell exactly what kind of kid he is. They confirm my suspicions that if he knew how to flip me off every time I go to take a picture, he would.

I had also forgotten to post Eli's first, and very hilarious, sentence. Adam recently became concerned that Eli's favorite stuffed animal, a worn out dog that must be washed weekly because my son insists on sucking and chewing on its eyes and face, was a hazard. Specifically, he worried that Eli would crack a tooth (to say nothing of choking) whilst committing this disgusting practice every time he went to bed. So I was compelled to cut the eyes of the beloved dog out. I gave it to him for his nap, eagerly anticipating his reaction to the change. He moved to grab the eyes and direct them to his mouth, at which point his jaw dropped and he exclaimed, "Uh oh! Help! No eyes!"

And then, last night he went to the bathroom on the toilet for the first time. I was clapping for him and telling him how cool that was and he looked up at us and nodded saying, "Nice." I think that is a result of all of the basketball we have been watching; anytime anyone does something cool, and the crowd cheers, a "nice" usually follows from either my or Adam's mouth.

And speaking of basketball and funny comments, I will go ahead and tell you how funny Adam is too: While watching the last two rounds of the semifinals and coveting the shoulders of those by the name of Dwight Howard and Lebron James, Adam confessed that if it were possible to transplant the arms and shoulders of either Dwight Howard or Karl Malone, he would gladly live with a white body and black arms. Go Magic!
Posted by Ashley at 1:12 PM

Ash! Such a cute little boy you have there :) I saw him at your mom's a while ago, and I loved hearing his deep little voice. But, I wanted to tell you that at this health food company I'm working for, they're starting a couple of blogs about health, nutrition, exercise, etc., and I'm in charge of putting together a bunch of content for it, so I pretty much just research and then write about anything and everything, and I thought, with you being a runner and loving to write, maybe you would want to write a running or other health article sometime. If you would, let me know! (Sorry this is such a long comment)

That was Jordan Lee by the way :)

How sad to cut out the eyes! I hope he wasn't too upset about it.
Good luck potty training

ha ha Eli is hilarious! When is the next angel coming? Have you been asked that a million times like we have? Arg.
I am so glad you guys share the same team spirit for the Magic as Joe does. And Joe also wished Kobe dead so he has never been such a Magic fan. :)

That is a cute little story...and a cute little boy. I love his tan skin and his blonde hair. Such a stud!! I hope you guys are doing well. We need to get together and do something soon!

Potty training already? I hope you are stocked with a cushy-tushy and a box of cracklin' oat bran (or perhaps a fiber one bar would work). So if E's out of diapers you are SO ready for another little baby...yeah!

Adam is funny, almost as funny as Eli, I can just picture the transplant now, I think it would look awesome. Eli is a super cutie, I love those pictures, the trouble kids are usually the cutest.