Observations gleaned from the Dark Knight

1. Women love Super heroes-unless she is sleeping with him and he has to leave in the middle of the night to save some other woman from some horrible fate. So, if you are a super hero, beware. Your woman will probably leave you for a regular, but probably more publicly famous, hero.
2. Morality is not (or should not be) relative, but it can change. While evil forces are always immoral, the moral minded often get easily tripped up by applying a rigid standard of morality to one who does not acknowledge said code. It is the reason why the whole torture debate exists: why should we abide by a strict code of ethics when our opponents don't acknowledge that it exists? Because it is moral. Well what if more people die because our soldiers won't shoot the suicide bomber disguised as a shepherd? The moral thing to do, in a few very extenuating circumstances, is often that which is considered most immoral.
3. Batman and George Bush share a lot of the same tag lines.
4. Licking your lips and talking as if you are a bit unsure of yourself not only makes you seem creepy and deranged, but sets an eerily shocking foundation for your moment of confident, splendid and calculated destruction. So if you want to disarm someone with your shock and awe, act as if you are unsure of what you are doing. Way to go Heath. Too bad your performance in this role arguably convinced you to kill yourself.
5. I have officially locked myself into viewing one genre of movie. My husband won't go see anything that doesn't have "man/men" at the end of the title, or contain the words "star", "wars" or "transformers." I think that pretty much sums up every movie we have seen together. Ever. Is this my fault? Oh well, I don't really care. Batman rocked. And I did go see Mama Mia-it was less than mediocre.

After eight days of ranching, reunioning, wedding stuff and what not without Adam, pizza/Batman night without Eli was a welcome retreat. I don't have any ranch pictures because I had no batteries for my camera. And Eli was mostly screaming the whole time and not looking very picture worthy. But I had a blast. SO if you want to see them, bug my sister to send them to me so I can post. Oh, but we buzzed E's head. He did not like it. 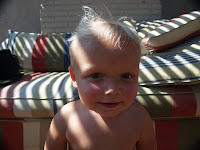 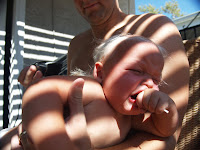 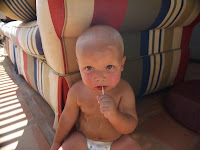 I don't know what I am doing?

Eli is so cute with his new do!

we loved batman too! i agree with all your observations and would like to add-the only thing missing from the flick (all males back me up on this one) was a hot chick. the chica was a good actress but im sorry...in real life those two ridiculously good looking boys would never give her the time of day. oh and it was a half hour too long. other than that-FAB!

it was a great flick, and it's refreshing to read an intelligent and grammatical/spelling error-free post. so thanks for that.

I haven't seen Batman--gasp! So I'll take your word for it. I loved E's duck fluff, but his buzz is darling!

still would have rather seen mama mia

ok, not really, bm was good

but my favorite part of the night was when i captured an awesome image of a real-life mullet, that guy was so hot

Cam, you know I like you. We are like best friends. But you never update your blog. I think you mostly started a blog to make fun of me, which is cool. I just reserve my list for people who actually write on a regular basis; Ben has just barely earned the right to be admitted back on.