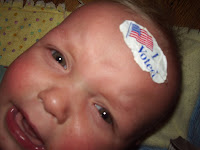 Dear uninformed voter:
I applaud you for going out and doing your civic duty today, despite your previous inattention to the political candidates and issues. That's okay. Way to go on aimlessly casting a critical vote; hopefully there are enough of you people to elect someone from the ballot who is no longer running. And fortunately, the great state of California, and I am sure others, helped you do that today by offering you a ballot with a list of presidential candidates ten names long. Wait, I'm sorry. You wouldn't know that there were really only three candidates left in the Republican party, and two in the Democratic. I am just glad that instead of updating our paper ballots to a more sophisticated and streamlined electronic voting booth (which could easily delete the names of Rudy Giuliani and Fred Thompson so that you, dear stupid voter, can't unintentionally sway a tight race in a nebulous and unmeaning way)we fund drug dealers and crackheads with welfare. Seriously, when a third of the all important delegates in the entire country come from this state, why on earth would you give the voters an inaccurate ballot? I realize most people know who is and is not still in the race, but given the fact that it is a close and contested race and that there are so freaking many delegates at stake in California, why do we still have a paper ballot that was printed off last year when Duncan Hunter had a chance? I mean, if any of Adam's faithful supporters took his admittedly solid advice on voting for a candidate by the strength of his name, then Duncan Hunter may just win California folks. So way to go ignorant voter; California has helped you, once again, remain so.

All I know is that if this race turns out to be a contest between John McCain and the Clintons, I won't even watch. How BORING. No thank you. I will retire from political TV watching and do something more productive. I know, it's quite the threat huh? And I will seriously write myself in and vote for me for President; I told Adam I would vote for him, but he doesn't have time, so just in case it catches on, I better put my name on because E and Duane and I could handle it; we have got plenty of time.

I told my mom this morning that I had never been more of a Republican than I am now. She almost cried, she was so happy. Why, do you ask? Because I have been applying for Medi-cal since August and it has not been as pleasant as passing a kidney stone. I don't even want to know how many tax dollars have funded this ridiculous beaurocratic nightmare from hell ordeal. The thought of the government getting involved in universal health care makes me want to vomit and move to Singapore, in that order. I cannot believe how incredibly inefficient and utterly useless the government is on this front. The thought of Hillary walking in and instituting a health plan managed by the government is about the worst idea since me voting for myself for president. That's why I voted for Mitt Romney because he figured out how to stimulate a weakened economy WHILE instituting health care for everyone, in a liberal state, I might add. Maybe this conservative talk show backlash can affect the race enough to let Mitt draw this debate out and get some of the super delegate votes. I kind of think it's too little too late though and I wish that Hannity and Rush would have pulled their heads out sooner. Mostly, I think there were just too many viable candidates on the Republican side for too long. I hope Obama wins the democratic nomination so I won't be bored out of my mind until November, and God forbid, for the next four or more years. Anyway, my good friend Michelle summed up Super Tuesday in response to my query about the padded presidential list-but it goes for the bogged down government programs too: "It's California! You'll learn not to expect much."
Posted by Ashley at 2:46 PM

oh sweet ash, i just adore you. at least in california, your vote actually makes a difference. and to be honest, it disturbs me a little that the most viable candidate we have is mitt, and that my least favs of all the ultra-conservs have jumped on his band wagon, but i agree with you: they should've done it sooner. and i can't stand how huckabee is still in the race. he's totally ross peroting it for mitt. and i pretty much just loathe mccain, because if i have to hear about how he was a foot soldier ONE MORE TIME, i'll lose it. maybe he should stop hillarying it for long enough to bring something fresh to the table. and the dems are pissing me off just as bad. so yes, i must say i agree with you that this time i am officially a republican and officially for mitt.

nice touch on branding your son. break him in early.

Ashley I can't agree with you more! If Hillary is elected I am moving to another New Zealand and renouncing my US citizenship. Hillary will destroy health care and ruin my job and your husband's. I'm doing a rotation in a PEDS clinic in San Bernardino, taking care of all the kids of the bright people in the world who abuse the system, sit on their butts all day, many of them do drugs, and we pay for them to get free food, health care and housing! They honestly think we owe it to them for some reason! Then they leave the clinic with all their free meds and go shopping and out to dinner to places I can't even afford right now! I come home every day ranting and raving to Andy. My newest theory is to do away with well fare and let people learn how to fend for them selves for a while because if they were actually starving they wouldn't be sitting on their butt at home getting high and waiting for their well fare check to arrive in the mail! It makes me sick that the people who actually contribute to the system don't get anything for free, yet all the losers in the world are doing pretty well! Yes, I am now more Republican than I have ever been, and I voted for Mitt.

Amen to both of you. Except I am actually glad that Huckabee is still in the race because I like him better than McCain...but he won't beat Hillary, so just pray that Obama pulls it out.

gosh, i just saw the results this morning and almost vomited. literally. Mccain is such an #$%&^%$^# that I would vote for a democrat instead of him (let me rephrase that, I would vote for Obama even though he wants to go make friends with Castro. At least he'll die soon, maybe). He's more liberal than conservative. It's almost as if we were voting for a democrat. Goodness. I'm so disappointed in this country. Who can honestly look at Hilary speak and take her seriously? Especially when you have her husband trying to campaign for her too. I'll be on that band wagon with you too. Let's move to Australia, at least it's prettier than Singapore and people speak more English than they do here!!!!

About Huckabee, I think that him and Mccain are sleeping together, in the sense that they have this master plan to keep Huckabee in the race just to take votes away from Romney. Could you imagine if he dropped out? Romney would definitely be on top. UHHHHH!!!!! I am super annoyed. Super Tuesday my butt.

Amen to the Health Care situation Ash! I pay a freak load of money for my health insurance because we own our own business, and therefore must get our our healthcare. I still say though I would rather have it that way that socialized medicine! I hope you are still up for my three crazy boys in two weeks! I will call you to chat about it!

This is how single minded "I'm voting for Mitt" I was...I didn't even realize that they had all the other candidates on that stupid ballot (the ones that aren't running). Stupid state. I unfortunately don't think any Republican is going to win this year- too much star power on the Dems side. I hate both Republicans. Completely dislike both Dems- so I'm voting for you. :) Couldn't agree more that socialized medicine is a disaster of an idea. But I've concluded that I will cover my eyes, pray that the Dem president gets nothing done (which is so, so very likely) and wait for 2012 when Mitt runs again and then wins.

This is how single minded "I'm voting for Mitt" I was...I didn't even realize that they had all the other candidates on that stupid ballot (the ones that aren't running). Stupid state. I unfortunately don't think any Republican is going to win this year- too much star power on the Dems side. I hate both Republicans. Completely dislike both Dems- so I'm voting for you. :) Couldn't agree more that socialized medicine is a disaster of an idea. But I've concluded that I will cover my eyes, pray that the Dem president gets nothing done (which is so, so very likely) and wait for 2012 when Mitt runs again and then wins.