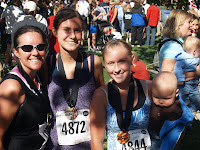 After a two year absence from what many people, including my husband, would term the crazy people sport, I finished another marathon yesterday. I really kind of didn't want to do it. I mean, part of me was seriously hoping that the bus would crash on the way up Snow Canyon so that I wouldn't have to do it. But alas, no such luck. I was reserving the possibility of jumping in the medical van at like mile 10 and being driven to the finish line...I mean all I really wanted was the shirt for crying out loud-which, by the way, they ran out of!! How do you run out of shirts when you know exactly how many people are running the race and many of them end up dropping out at the last second anyway? Honestly. Really though, its tradition. I could not deny the gravitational pull I feel toward running, even when I don't think I want to. Its also really fun to spend that much concentrated time with my mom and sister. And its just beautiful. I love being outside when the sun comes up even if I am running and my legs hurt and its cold and I still have 20.2 miles to go before I can sip on a Diet Coke. This was Chel's first and she performed like a champ. She probably could have run it a lot faster if my mom and I hadn't been there. We all finished within two minutes of each other. Its hard to contain the overwhelming explosion of emotion you feel at the end; I mean, you just want to hold it all in and not cry and shout "I love you!" to everyone around you until you can at least cross the finish line; its just hard to keep it in. The only other time I have ever really felt that electric surge of emotion that I get when I finish a marathon is when Eli was born. It really is pretty remarkable. I love hate it. I really am done for a while though. I tell Adam that every year. But really. I am not going to do another marathon for many moons. It is such an exciting and self fulfilling exercise, but I need to be done for now. So nobody tempt me by getting into the New York marathon or something cool like that! I am done for now. 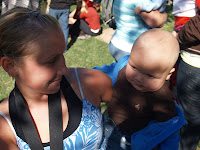 Good for you, i cannot believe you run those marathons, i could never.

way to go! i have always wanted to run a marathon but have never committed myself to one. Youre amazing! And your baby is darling by the way.

Girl I love how you told me you werent gonna run...I knew you would! What would I do without my tough stuff friend Ashley?

Good job, Ash! You are super woman. I'll take your word on the thrill of running 26.2 miles in one morning. I'm sure it's fabulous. I think I'd rather give birth.
I'm glad you accomplished your goals!

Congrats!! I think that is so awesome that you did it! I'm going to have to start tempting you though to do another one! :) I would love to do one but I don't think I could do it without a professional- I term you as a professional- amazing woman! ANyhow, Congrats!

Yeah, you survived!! I am always impressed with those that run for "fun":) That is wonderful that you accomplished that, and welcome back to Loma Linda! Lins.

Oh ashley...I love your love for running. I really need to find something like that to do for myself. I think if i got back into swimming I might do a swim around key west! That would be exciting, but after being away from Miami for so long my fear of sharks has returned! Haha...I never really was scared until recently.

Anywho, I want to start traveling around and visiting friends. I think maybe next year I will and Cali will definitely be one of my stops. I don't get to see Aubry too much during the week and I'm just getting lonely without him. We'll see how Savy does on this trip to Texas for Christmas.