Thoughts on begetting a daughter 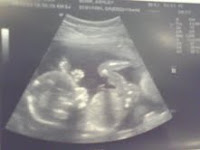 So here is the very first picture of our very first daughter. To be honest, beyond being excited for something, shall we say...a little different around here and being thrilled that both my sister and I are having girls at the same time, I haven't thought that deeply about what it will mean to add a little girl to our family. So I thought I should think about it more which is the reason for this post. I have had two miscarriages this past year. One was a twin pregnancy. I really intended to have our third child closer to Tate than the space between my first two. And I just assumed it would be a boy--mostly because I always thought it would be fun to have all boys... and that because of that, Heavenly Father would just figure that it would be a funny joke to give me EXACTLY what I wanted and sit back and laugh at the outcome. But alas, this baby girl will be 3 years younger than Tate, just as he is 3 years younger than Eli. And she is, in fact, not a boy. I realized, ultimately, as I began to consider the possibility that I might NOT be able to have any more children that things like spacing, gender and whatever else I stress and moan about during the pregnancy don't really matter. Furthermore, I don't have any control over them anyway! I know these things are fairly self evident but they were good things for me to learn. Heaven knows I have learned much from parenting my two sons thus far--more than I thought I would and definitely more than I wanted to! So as I think about what having a daughter will mean to our family and to me personally, I realize I am less scared than I thought I would be, more excited for her brothers to have a sister and VERY concerned about doing her hair. Other stuff: 1-I really hope she has her grandma Natalie's thick, lustrous hair. In the color of my mother's shiny, dark brown. If she gets my dumb, fine, thin hair then we are both in trouble because it will look awful all the time. I can't even get my own hair done on a daily basis. This is seriously the most troubling thing to me about being a mom to a girl. 2-I don't worry about her being a princess. I am not a princess. I do not care for princess stuff. And if she is born with innate princess tendencies, her brothers will certainly beat them out of her. She is just going to have to like running and motorcycling and hiking and camping. 3-I hope she is sweet. I hope she is a peacemaker, a calming influence on our family which can sometimes spiral into utter chaos. I hope she is a version of my sister Chelsea because we got along so well growing up! I want someone in our family who has the same effect that Chelsea did/does on me and our family. And if she is like me...well, that is cool too I guess. I am not so bad. But Chelsea is awesome and I would think that was such a gift, which if I may be so bold, I sort of think I deserve. 4-In the same way I think someday about sending my boys on missions and relishing/despairing in the wonderfulness/awfulnees that accomplishment will bring, I envision the day my daughter gets married and the same bittersweetness that will bring...already. I am impressed by how important it is to teach her to find the right person and how grateful I am that I can unequivocally point to her own father as the type of person for whom she ought to be looking. What if I could not recommend him? What if I had to tiptoe around the issue of insisting that she respect her father while also ignoring what he really stands for? I am truly thankful as I raise sons that I can point my finger at their dad and say "Aim to be like him," and that I can also say to my daughter "Find someone like him and you will be happy." Makes things a whole lot less complicated. 5-I am excited to have a running buddy. An errand buddy who *hopefully* won't constantly dart away from me. A reader to discuss books the way boys are not necessarily prone to do. A talker. A girl I can teach to like football AND cute clothes. A critic for my attire as I get older. What else am I missing? What is awesome about having a daughter? Or not so awesome?
Posted by Ashley at 1:32 PM

I had lots of the same thoughts when I was pregnant with a girl after three boys. It's a fun ride to see how different--and the same--girls and boys are. I'm so sorry about your tough year of loss. I can relate to that too! But I've learned that God is in charge, and there's always wisdom in his timing, even if we don't see it.

congrats! (also so very sorry for the miscarriages. never an experienced i wish on any one)

it will all be awesome. so very awesome.

Thanks for the sweet compliments- I can't imagine what your little girl will be like after the two tornadoes of fun and excitement, but I'm sure she'll be awesome. I think you hit the high points of having a girl- their innate desire to snuggle and giggle and tell you what things are so so cute.

So excited to meet this little girl! She will be darling, and you're the best mom!

P.S. I just failed four times on the word verification thing, so I hope you really appreciate this comment. It took a while to get it here. :)

Congrats!!! We are so happy for you guys and for the hair, I am still trying to figure that out after 5 1/2 yrs!

I thoroughly enjoyed reading that post!! And congrats on a baby girl. That is spectacular!

When I clicked on your blog, I was so hoping to find this wonderful announcement--that is of having a baby and a girl, no less! Congratulations Ashley and Adam. I am so sorry you had to experience two miscarriages before this happy news. I can only relate a little to that, as we've emailed about before. This baby girl will be adorable, just as her older brothers and a sweet spirit to add to your home. Congrats!