I am hoping that my blog will make me feel better. I didn't sleep very well last night. And it is so stupid. But its not, too. I might as well do a quick update as well while I am on here, since THAT doesn't happen very often...we are all settled in in Colorado Springs and I really really love it here. We have a great neighborhood and the sun shines all the time and there is a Target two blocks away! Adam loves his job and we love even the idea of knowing we can drive back to Utah and family in a day if we want to. Adam's dad was out here doing a job in Boulder for a few weekends so we went up there to watch the helicopters and play in the mountains. 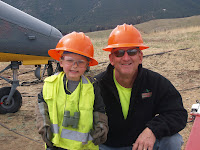 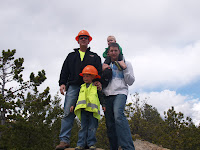 What a gorgeous sliver of the Rocky Mountains. My kids were in heaven. We even got to sleep in the "bus house" and Tate yammers on non-stop about helicopters dropping hay on the mountain. Eli is all registered for kindergarten; I am a little apprehensive about it because I know he will probably struggle... which brings us to my need for decompression. I have made no secret of the fact that Eli is a difficult child. Nothing with him is ever easy or smooth. He has an impeccable propensity for trouble making and has a very very hard time following even simple rules. HOWEVER. He is sweet and friendly and charismatic and fun and is so excited about playing with all of the kids in our neighborhood. Having just turned 5 and learning how to ride on two wheels, I feel confident about letting him play out in our cul de sac with the neighbor kids. I feel like he is old enough to start figuring out how to be a good friend and play like a normal kid. There seems to be a general consensus to let the kids play without parental hovering and it is a lovely throwback to yesteryear when kids just played with sticks and rocks and chased each other on their bikes. And mostly, it has been a great experience and so so fun to watch. But our next door neighbors hate us. Honestly, I get it: Their kids are older. Their youngest daughter is 7--we have two very young, obnoxious, mischievous boys... They hate dogs--we have a very obnoxious dog. They are meticulous about their yard and it shows; the contrast between our two sets of grass and plants is laughable. So the dog and the kids pose a threat to their beautiful yard and landscaping (I am not being sarcastic--our kids really do walk on the rock wall and wander into their yard because we do not currently have a dividing fence and I simply cannot contain them all the time. They get out.) So my only interactions thus far with my next door neighbor have been her yelling at me because my dog was barking or my kids were irritating her. Fair enough. But yesterday, for the very first time since we moved here, the backdoor neighbor's little girl, Kennedy, came and knocked on our door for Eli to play. That may not sound like much, but it was a big deal. He was ecstatic and so was I, lame, I know. Not 10 minutes later he came in with giant tears and a red face to say that Ava's mom (the next door neighbor) told him to go inside. My heart sank. I went over to ask why, assuming I would need to apologize for something wrong that he did. She lit into me again, beginning, weirdly, with "I know you hate me..." I shook my head and was silent but was thinking, "well you haven't given me very many opportunities to like you." I asked if he was being mean or what the problem was. She retorted, "He is 4, Ava is 7. He is always walking on my rock wall and Ava can't be expected to tell him no all the time." I didn't know what to say so I just said I was sorry and that he just wants to play. It really sucked, then, to watch every neighborhood kid congregate in my neighbor's yard and explain to Eli why he cannot play. In one sense, it is good: Eli has got to learn that if we wants to play, he has to follow rules and play nice. And that is the only way he is going to learn to respect what other people say. But the REAL problem and the reason why I am upset is that my neighbor has now poisoned her daughter against Eli, and she has in turn poisoned the neighbor kids. She yelled at him in front of them so now they think they can do the same. And, now that I realize that, I put together the fact that every time Ava is outside, all of the kids spend most of their time knocking on my door to tell me that Eli "went to the end of the street" or "he can't come in our yard" or "he said shut up" or "he almost hit me with his bike." Like I said, I know Eli is difficult. But it is so painful to have other people point it out, especially people with whom I would like him to play. Its like privately admitting you are fat and being self aware about it, but it hurts so much worse if someone else says it. I personally have pretty thick skin. I don't care much if the neighbors are intolerant or unkind, that is their problem and it doesn't really affect me at this stage of my life that much. But it does affect Eli to have other kids label him and treat him like the "bad kid." And I hurt so much for my child as I watch him try to make friends. I am just starting to realize now that Eli's behavior is going to start affecting HIM and his relationships with other people--not just Adam and me. Up until now, it has only been hard on us. And my heart just breaks for him because I know he will struggle...as much as I would love him to just get along easily with friends, I know he will not. And I know he has got to figure out how to do it on his own. There is not much I can do without turning into a person that I really do not want to be. That hurts.
Posted by Ashley at 7:36 AM

Poor little Eli! And poor Ashley! Seriously! Some people have a lot of nerve. I can't believe how rude people can be. He will learn. It will just take longer for him to learn than other kids...but he'll soon realize what he needs to do and what he needs to not do to play. Just give him kisses and a big hug! I am so sorry! xoxo

I am so sorry!!! Why is parenting so hard sometimes. I don't feel old enough sometimes to deal with parenthood. He will grow up and figure it all out. Do you remember Matt Bushnell??? Well he actually lives by me and his little boy sounds just like Eli. I think there busyness will someday be to there advantage. That lady just needs to relax. Just wait. At least he isn't a dull and boring kid;)

Ash, reading your post was like reading the script going on in my mind each day. My little Bentley is facing the same situation right now. Each day is a total struggle and I often find myself crying, frustrated and confused. I often worry about what all my neighbors think of him and what they think about me. But, bottom line...he's a dang good kid no matter what all the "so-called good kids" say. And even though I don't know Eli personally, I know his mother and know that she's a dang good mom that is doing an awesome job raising such a fine boy. Keep it up girl! I have to remind myself a hundred times a day, that the hardest job in the world, is the best job in the world! Our boys will grow into fine young men and be great, spirited men. No doubt in my mind!!!

Have you talked openly with your neighbor about your feelings? I think you should. Especially if she said that you hate her. She is obviously feeling strained as well. I would just explain the struggles that you have had, that he is young and immature and doesn't mean to cause problems. I would express your concerns about how she and the other neighbor kids are making him feel. Ask her what she would like you to do and what she would do in your position. Maybe if she gets to know you a little better, she will understand and tolerate Eli. Good luck!

Maybe I am just a little over-protective but I am fuming mad right now and am about ready to drive right back to Colorado Springs and give Ms. Stick Up her Bum a mouthful with a middle finger "Friends" style on the side. That was like reading a great book and coming to a great scene and then having it go so wrong you're just left so angry that you can't get in there and change it. Of course E is a tough cookie, but I think the toughest cookies are the ones who need the extra love and understanding- not a harsher crack of the whip.
Ah. Sorry for my rant on your vent but I actually do agree with Niki. I think maybe you should go talk to her and try to un-stain E's name in the hood. Love you

All y'all are right. Thanks for your boosts. Here is a funny update to the story: I was out weeding last night and she opened her door with a smile on her face and asked me if I wanted to plan a block party with her so that all of the new people in the neighborhood could get to know each other...uh sure. So its all good and we are bff's now apparently. I think she is just one of those people who gets nasty and wants to pretend like it didn't happen the next day. And bless Eli's heart, he is just going to have to learn to follow the rules, plain and simple. I love all of your comments; and I do feel better after writing it down, and of course now that my neighbor and I are party planning best friends--at least until she gets ticked again.