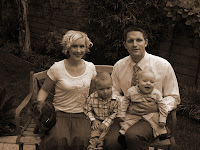 Well, I believe I began last year's report with a joke concerning my refusal to join Facebook; so I suppose the introductory joke this year is that my friends will probably be reading this on Facebook.

Besides that most momentous of occasions--mine and Adam's conversion to the cult of Facebook-- 2010 has gone pretty similarly to the three years preceding it: We cleaned up many messes, tried to be nice, got farther into debt and vacationed in Utah. Glamorous right? Other than that, our second son Tate, otherwise lovingly known as Fluffer Nutter, Tater Fluff, or simply Fluff, was born in March...so that was a pretty big deal too. It’s a short report. That being the case, let's discuss the things to which we are looking forward for 2011, shall we?

Adam will graduate from the Loma Linda School of Dentistry in May. He has worked incredibly hard and for many obvious reasons, we are looking forward to it. I have also finally managed to convince him that running is a good idea. Adam is mostly eager to graduate and begin working; we are both eager to follow the advice of propets and economists alike as we begin our ascent out of debt.

Eli is looking forward to perfecting his sharing, listening and being nice to Tate skills on which we have so diligently worked this year. He hopes to amass as many gold stars for practicing those skills as possible. He continually asks me if he can do this or that when his 4…so we have a lot to accomplish beginning April 7th. His tenacity, persistence and energy never cease to amaze us.

Tate is looking forward to being old and big enough to withstand Eli’s attempts to wrestle, smother and generally torment him. He has perfected the speed crawl in an effort to flee his attacker; but unfortunatley his girth, speed, and overall sweet, smiley and adorable temperament have been largely ineffective tools of evasion.

Much of the same could be said for Duane: He spends most of his time trying to avoid attack. Duane’s enthusiasm for running has waned as much as Adam’s has increased. I believe he is hoping to soon become a lap dog…not gonna happen.

All that being said, I am most looking forward to being able to have my boys in the same room without anyone getting hurt. And yes, I realize this could be years away. I am also ready to begin a new chapter in our lives. Mostly I try (try being the operative word in all of this) as often as I can to pause when my boys laugh together, show me or each other affection or do something so hilarious that I am forced to smile and laugh out loud. I measure my level of success as a person and a parent by those moments.

So at this time of year, I have more successes than failures. I think the nature of this most wonderful time of the year is God’s gift to mankind. For that, and countless other blessings, I am indeed grateful. Merry merry Christmas to you; we wish you a more plentiful amount of smile making moments.

Love your Christmas card. You look fabulous and as always, you have me laughing out loud. I'm so excited for you to take some steps towards independence. Good luck! Any idea where you are headed? Back to UT?

Thanks for personally giving me one of these Christmas cards. ~What a lovely family!

Have a Merry Christmas and a Happy New Year!!