Facebook doesn't suck THAT bad and Fall exists outside of California 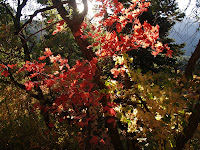 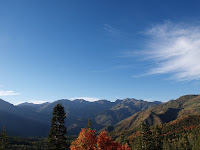 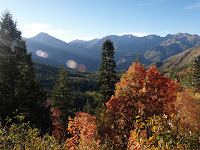 I still have two profiles on Facebook. But at least now I can log onto one of them. Still not sure about the whole thing.

We just got back from a ten day excursion to Utah and New Hampshire. Hallelujah for the season of Fall. We got to go dirt-biking and boating in Utah, 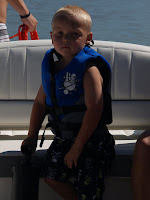 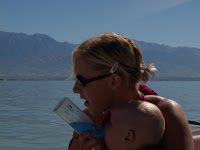 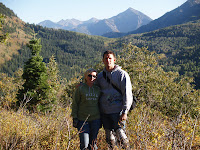 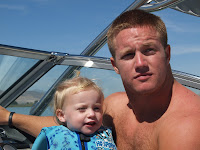 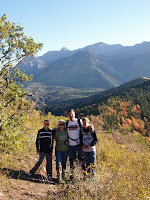 walk the "Freedom Trail" in Boston, eat at the impressively delectable "Quincy Market" therein and generally take in the beauty that exists in New England. It was wonderful and a completely positive experience; Tate was so so good. And Eli was partying it up with Nannie and Grandma while we were checking stuff out back East. We also spent time with Marcus before saying goodbye for two years. Between the two or us, Adam and I now have three brothers on Latin-American missions. Pretty sweet.

Anyway, so now I am home. It is a hellish 110 degrees today. Uh. I want to go back to a land where Fall, and Winter, for that matter, exists. I felt like a FedEx coordinator-going back and forth between two houses while we were in Utah, then sending part of my stuff one place, my kids' stuff to other places and then collecting it all again, bringing it home and sorting through it. And now I have to put it all away today. Bother. Oh, and I should probably work since I blew that off for an entire week. I am also especially crabby because my (no doubt adorable) niece Leila failed to make an on time appearance. She was supposed (according to my well laid out plan) to be born the day before I got to Utah so that we could get to know each other for a few days before I had to leave. But noooo... And then she was supposed to debut while I was in New Hampsire and I would stay for a few days extra to hang out. Also, a no go. In fact, she is still not here. She should be here by tomorrow, as her mother is currently attempting to forcefully vacate her through induction... that sounds harsher than I meant, but you know what I mean. So anyway. I am not very happy with her but nonetheless still dying to meet her. I am going back to Utah next weekend to hang out which will actually be more fun since Adam will keep my boys--wahoo, my husband is such a rock star. Good luck to you Chels; I doubt there is anything in the world as wonderful as having a baby, especially your first. My thoughts are with you today, tonight and tomorrow (hopefully not longer than that!!!) Chel.
Posted by Ashley at 3:04 PM

Oh my gosh Ash there has been a lot going on in your life this summer! First of all your hair is super cute! Love how short it is :) Congrats to chels.... That's exciting news for the whole family! Oh and when did your brothers grow up? Holy cow they are freaking huge!!!! Also It sounds like you guys had fun back east! I have always wanted to go to boston....

Went to the hospital twelve hours ago...thought I would have a baby by this time. Instead I am blogging at mom's with an IV in my arm, two hospital bracelets, and somewhat painful contractions every 2 minutes. Awesome. Good news is I'm pretty sure the third time we go back to the hospital today (3 hours from now) we will be staying until Leila is a living breathing baby. Long live Princess Leila!