Ok. So I hope everyone enjoyed no pants day to its fullest. Now, as promised, part 1 of the pants saga.

It was January 2007, approximately 2.5 months before Eli's birth. Adam, Chelsea and I traveled to Ecuador to complete Adam's Latin American studies internship, volunteer our "teeth cleaning skills???", have one last adventure, and watch the wife of a small town mayor shamelessly flirt with Adam. 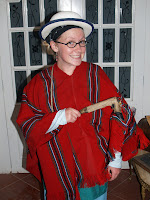 (This is the outfit she seriously made me try on in front of like 30 people, probably to humiliate me and show my husband how much comparatively hotter she was. Good times.) Anyway, I think we paid 250.00 round trip for the airfare-which is the entire reason we went; a charity organization had offered the tickets to anyone who would use them before the end of the month. However, we didn't realize until we were at the airport that these tickets were standby tickets for employees of the airline. So, as we were trying to check-in wearing our comfortable sweats for the 14 hour flight, the attendant explained to us that we were supposed to be dressed in business attire. He was telling us that we could not fly, that we were supposed to be accompanied by an employee and "bla bla bla I am a small time employee on a big time ego boosting power trip." It got down to like 20 minutes before our flight was supposed to leave. Chels and I were just kind of sitting there in a nervous panic while my husband politely and diplomatically (something we both know I am not capable of) weaseled our way into a compromise; that compromise turned out to be the greatest source of entertainment for that trip, and really ever since: Adam started to open his suitcase in a quiet flurry. FYI That is how you can tell when Adam is really mad; he gets very quiet and does things really quickly. He pulled out a skirt for me, and told Chelsea to do the same. So we slipped on skirts over our sweats and discreetly pulled off the sweats, no big deal.

Adam, however, and I am seriously still laughing hysterically as I type this, proceeded to shove himself IN HIS SWEATS, MIND YOU, into a second pair of khaki pants. It took a few minutes for him to shove the sweats down into place and button up the overlaying khakis; we all-meaning Chelsea and I and everyone else waiting to check their baggage-just stared in disbelief...and none of these people even knew how much Adam hates pants! He looked up at the attendant with a resigned but indignant look, and demanded our tickets. I don't know if it even would have been possible for him to do anything else besides hand them over after watching Adam put on a second pair of pants right in front of him. So my husband wore two pair of pants. For 14 hours. While sitting on an airplane. It is still the most hilarious thing in the world to hear him complain about it. But, I think he would agree that the trip was well worth the suffering he endured. 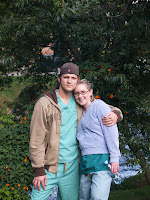 And aren't I a good sport for posting this picture? Kind of ironic because it looks like I am the one wearing two (or three, or four...) pairs of pants huh? Lay off, I am like seven months pregnant here. And besides, you can kind of see how cool, and incredibly huge, Quito, Ecuador is. 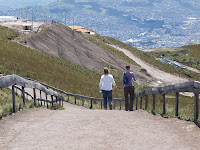 Oh I've been waiting and hoping that was Pants story part 1! It truly never gets old and I'm having myself a grand-ole laugh all over again. Good times indeed.
P.s. my word verification is figly...kind of like fugly! Ha Ha

hahaha that is so funny! Why does he hate pants so bad? I guess I dont like them too much either. Right when I get home I change it to my comfs. They're just not comfortable.

Haha That really is so funny! I wish I could have witnessed it :)

That is a long time to be wearing not just one pair of pants but two pairs! And are you sure you're even pregnant in those pics?

Maybe you are looking at my sister...I am the fat one on the left.